Our top choices of the best treadmills for 2022, based on price, durability, features and consumer feedbacks.

The Treadclimber TC10 is and old model - out of manufacture. It has been replaced with the new, improved machine for walkers - TC100.

When it appeard on the market, Bowflex, the manufacturer of the TC10, marked this machine as the most affordable, motor powered cardio machine. Although there was a cheaper model - the TC5, the TC10 was their best selling and most popular exercise machine. It is placed right in the middle of the TreadClimber series. According to the real user opinions and our reviews, we also believe it is the right choice for most users. It has more features than the intro-level TC5, yet it’s a lot cheaper than the high-end TC20.

Designed for walking, its motor provides speeds ranging from 0.5 to 4 mph (0.8 - 6.4 km/h). You can track it in 4 separated LCD windows (speed, time, distance, and calories burned). This new technology lets you burn up to three and a half times the calories than on a treadmill at the same speed, and up to 40% more calories than at a stair climber. So, as they say: Work out smarter, not harder!

It is built on a sturdy frame allowing "heavy" people (up to 300 lbs) to take advantage of burning more calories while walking. Its considerable smaller footprint compared to traditional treadmills, makes the TreadClimber TC10 a perfect choice for home use.

The Bowflex TreadClimber TC10 offers 12 intensity levels, ranging from beginner to athlete. Many users were skeptical at how many calories can be burned at speeds of less than 4.5 mph. The point of the TreadClimber technology is to get three fitness machiness in one. It provides the walking benefits of a treadmill, climbing stairs that is widely regarded as one of the most efficient and effective cardio and strength building workouts, and a low impact motion of an elliptical trainer.

Where to Buy Treadclimber on sale?

During our reviews, we got promotional discount codes from the manufacturer. You can use them to save some money when purchasing Treadclimber from Bowflex. Besides the official website, you can also buy Bowflex equipment from several online fitness stores. Over the years, only a few of them have gained an impeccable reputation. One of them is Amazon.

It is not the same if the product is made of cheap parts, or it has a low price because we've found it on sale for you!

Treadmills for Home Use

No metter if you are looking for a treadmill for light commercial use or you want a home treadmill loaded with features, here you'll find everything you need.

Commercial treadmills are differ from home treadmills because they are built to withstand frequent use in health clubs.

SEASON SALES ARE ON! 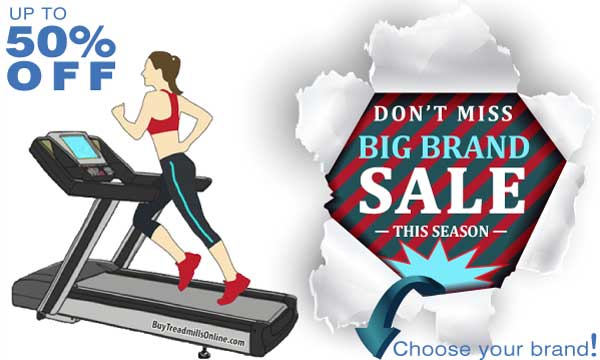